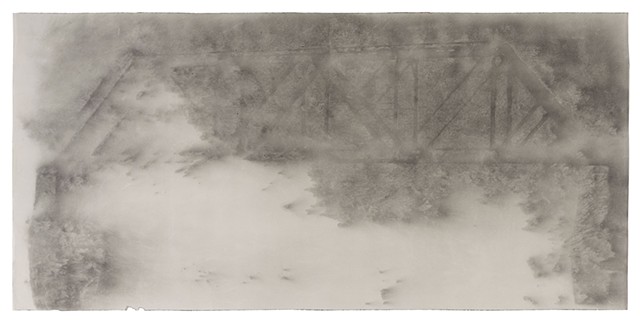 50 States: Arkansas, the fifth piece in our 50 States Project is a ballad in charcoal powder, wind, and text inspired by a 1920s history of an interracial gay couple who’s lives intersect with many of the great forces that shaped the identity of the state.

For the first time since we started the 50 States Project, we have not been able to find a definitive paper-trail to document the relationship at the center of the piece. As concrete evidence, we have nothing more than the assertions of a few historians (who conspicuously choose not to cite sources) and the coded language of century-old newspaper reports. Over two years of research we realized that rather than dealing with the stuff of archival history, here we are firmly in the territory of folklore.

What we “know” is precious little. We know that in 1926 a white man named Wellington Stephenson became the president of the Missouri & North Arkansas Railway and moved with his African American lover, a man named Jesse, to the small town of Harrison, Arkansas. The two lived together in a converted luxury railcar (car number 99). Jesse was ostensibly a live-in servant, an arrangement unheard of not only because of its same-sex dynamic and the exceedingly close quarters, but because Harrison, Arkansas had, only twenty years earlier, violently expelled its entire African American population, becoming one of the region’s notorious “sun-down towns” and later a haven for self-proclaimed white supremacist leaders.

We know that seven years after moving into their opulent rail car Stephenson and Jesse were run out of town when the M&NA hit financial turmoil.

We know that Stephenson, a “confirmed bachelor” into his late fifties, returned to Kansas City where he lived with a wife (a widow with several grown children) in a development with deed restrictions that excluded black residents.

We know that Jesse disappears from the historical record. We haven’t even found his last name.

We know that the rail car they lived in was burned to the ground in an ownership dispute ten years ago, ending a storied career that began in 1888 when it was built as a luxury Pullman for the Rocky Mountain Railway and christened “The Manitou”.

The prints are made from stenciled charcoal powder, blown away by wind, and are based on images (some archival and some taken by us) of the little we have left of Wellington and Jesse: the train car they lived in (design drawings, a picture from it’s heyday, a photograph from its retirement in Kensett, Arkansas), an M&NA bridge crossing the Buffalo River near Gilbert, the stone pier that is the only remaining vestige of that bridge, a 1920s map of the Arkansas rail network. These are paired with a ‘ballad’, composed by us, and rooted in the research and interviews we’ve done over the last two years.

Building on our work on Jesse and Wellington, we plan to spend the next several years working with members of Northwest Arkansas’ queer community to develop a collection of LGBTQI ballads, folklore and mythology: the stories ‘we’ as a queer community always knew were true but could never prove.