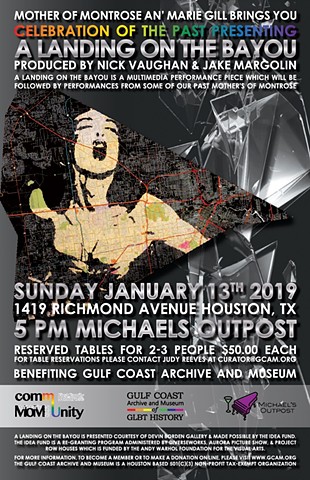 A Landing on the Bayou
< previous

A multi-media artist’s lecture/performance exploring Houston’s diverse, rich and political drag scene in the years between the Stonewall Riots and the beginning of the AIDS epidemic (1969-1985). Drawing from audio recordings of interviews the artists conducted with a wide range of community members including Hot Chocolate, Tasha Kohl, Ray Hill, and Mary Hooper, the piece celebrates the legendary and amateur drag performers who together set the stage for Houston’s role in the LGBT rights movement and held the community together during the darkest days of the crisis; raising funds through their unbounded generosity and raising spirits through their luminous performances.

“A Landing On the Bayou” is made possible with support from The Idea Fund. The Idea Fund is a re-granting program administered by DiverseWorks, Aurora Picture Show, and Project Row Houses and funded by the Andy Warhol Foundation for the Visual Arts.

A Landing On the Bayou" was developed at Houston Community College Southeast's Wedge Space and at Devin Borden Gallery. Further development was supported by the Alley Theatre.