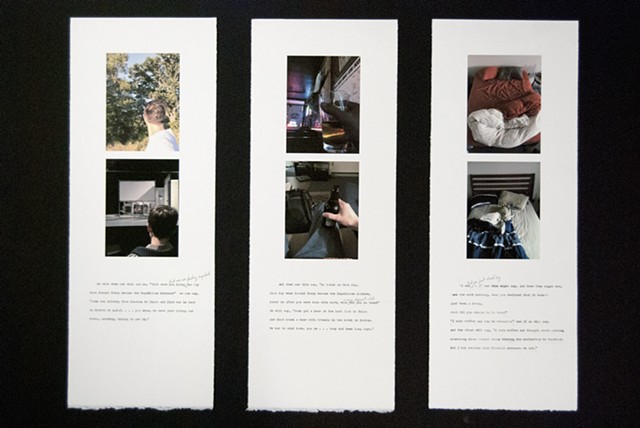 Edition of 3 and 1 Artist Proof

The day that Donald Trump clinched the Republican Nomination Nick was in Boston & Jake was driving from Houston to Tulsa. We took iphone pictures of where we were when we heard the news, of what we had to drink that night, and of our beds the next morning.

So that when our kids ask us, “What were you doing (that was so fucking important) the day That Donald Trump became the Republican Nominee?” we can say, Jake was driving from Houston to Tulsa and Nick was in tech in Boston at A.R.T. . . . you know, we were just living our lives, working, trying to get by. 2.

And when our kids say, “So later on that day, That day when Donald Trump became the Republican Nominee, Later on after you were done with work, what (crazy, defiant shit) did you do then?” We will say, “Jake got a beer at the Hunt Club in Tulsa And Nick drank a beer with friends in the hotel in Boston. We had to wind down, you see . . . they had been long days.” 3.

“I see (that you just stood by) . . . “ our kids might say. And then they might ask, “And the next morning, when you realized that it hadn’t just been a dream, what did you choose to do then? “I made coffee and ran to rehearsal “ one of us will say. And the other will say, “I made coffee and thought about posting Something about Donald Trump winning the nomination to Facebook. But I had decided that Facebook stresses me out.”